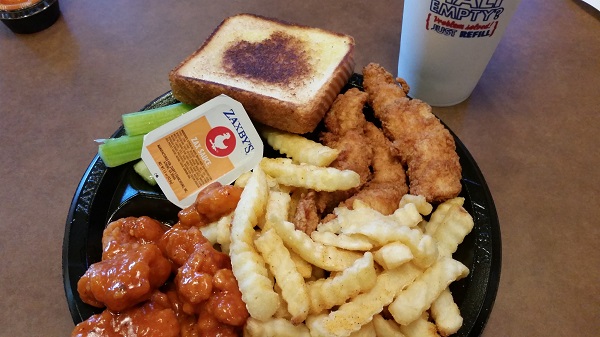 I’ve reviewed the Chicken Fingers in the Buffalo variety before. I found them skinny and the “fingerz” I received tonight were no exception. The boneless wings, while not scrawny, were mostly breading. Generously drenched in sauce, they were tasty and filling, although I really felt like the wings and fingers could’ve been more substantial in the actual chicken department.

The crinkle fries are lightly seasoned and were a good companion, as was the slice of Texas toast. All in all, the breading probably filled me up more than anything else and I found that I was full before even finishing the sides. You could easily share this meal and, at almost $9 for the boneless and almost $10 for the traditional bone-in variety, you should.