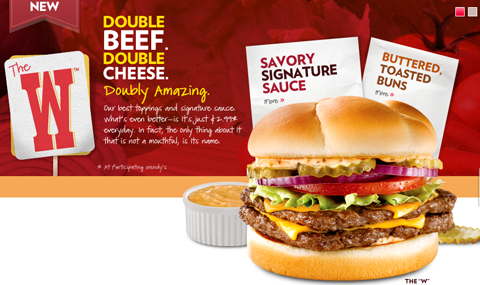 Looks like Wendy’s has unofficially jumped on the Big Mac clone bandwagon with their new “W” cheeseburger.  Like the Carl’s Jr. Big Carl and the Jack In the Box Bonus Jack, The “W” is a double stack of beef with cheese, lettuce, tomato, onion, pickles and the key to any Big Mac clone: thousand island dressing.  Now before you freak out that Big Mac’s sauce is not, literally, thousand island, let’s all agree that the popular salad dressing is at the core of all of these sandwiches’ spreads.  Dubbed “Signature Sauce” the spread is tasty and goes well with the meat and cheese. 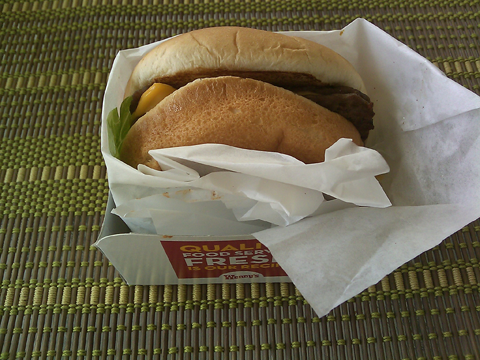 With the usual breathless anticipation I opened my bag and was surprised to see the actual sandwich staring up at me.  In an unusual twist my burger was not completely wrapped.  Instead, it sits in this cool little box and wrapped in plain white wax paper, a throwback to the style of ’50’s burgers.  Still, you can see without removing the crown that this looks nothing like the picture. 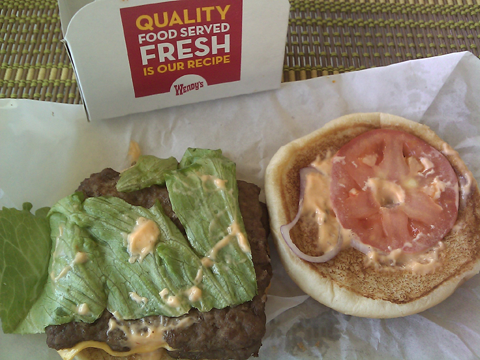 OK, updating the popular Wendy’s saying, my first reaction was “WHERE’S THE PICKLE?”  As you can plainly see in the promotional web image at the top of this story, there are supposed to be pickles.  Mine were MIA.  The sad strip of lettuce and lonely onions also are no match for the image.  Of course, long time readers know we never expect the food to look like the stylists make it look.  Still, I was expecting the basic ingredients to be present.

Anyway, the burger was good and satisfying.  It isn’t a home run, and I’d still rather have a Big Mac.  But at $2.99 promotional pricing it is a great alternative to your normal Wendy’s choices.