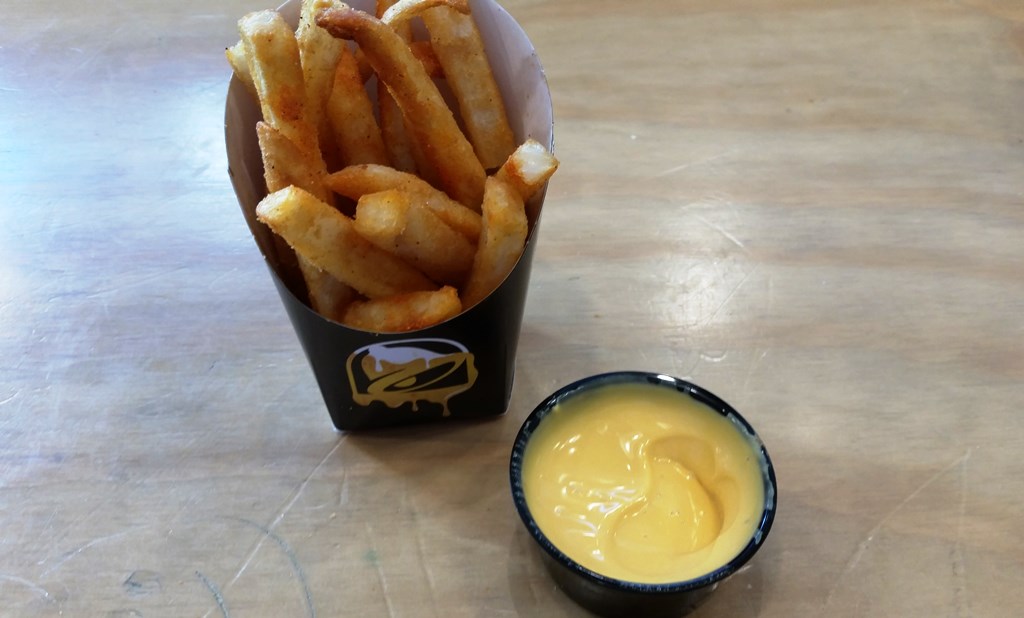 Taco Bell’s new Nacho Fries are the fast food chain’s long-anticipated foray into the competitive world of fast food french fries. How do they rate? Read on.

When I first head about Nacho Fries I wasn’t even sure these were a potato-based menu item. After all, Taco Bell is nothing if not creative in their re-use of existing food components. So I fully expected a “nacho fry” to be some sort of french fry-shaped wisp of deep fried tortilla or maybe even a mini churro, with a nacho cheese dip on the side of course. Well, they are potatoes and they are what you’d pretty much expect from Taco Bell.

The Nacho Fry is seasoned in a not-to-spicy blend of Mexican salt and spices. It’s slightly more Mexican food than plain old season salt, but just barely. The fries come in a standard fry container but with a stylish Taco Bell logo drenched in nacho cheese. Clever. The side of cheese is exactly what you’d get with your nacho order. I’d say it was just enough to dip all the fries but the smallish side item wouldn’t stack up next to a jumbo order from a mainstream burger joint. For that, Taco Bell has an answer: the 710 calorie Nacho Fries Bellgrande. But I digress.

The main order of Nacho Fries is only $1. It carries 320 calories, 18 grams of fat, 2 grams of saturated fat (probably all in the cheese), less than 5 milligrams of cholesterol but a whopping 620 milligrams of sodium. Whoosh. That’s 1/4 of your daily allowance.

The above receipt makes me curious as to whether they will roll out multiple versions in the future. Note that there is a line item for the fries but then sub-items for “seasoned fries” and “nacho chz dip.” Maybe other stuff will be added in the future in true Taco Bell mix-and-match fashion. Or maybe the Nacho Fries Bellgrande is listed the same way but with meat and sour cream also enumerated. Who knows? Who cares?!

Bottom line: These fries were fine but I wouldn’t get them again. Call me old fashioned but I prefer chips with my nacho cheese. And even at $1 I wasn’t wow’d by them. If I get fries at a Mexican restaurant they will probably come from Del Taco. Those are just pure crinkled goodness. These are just so so.