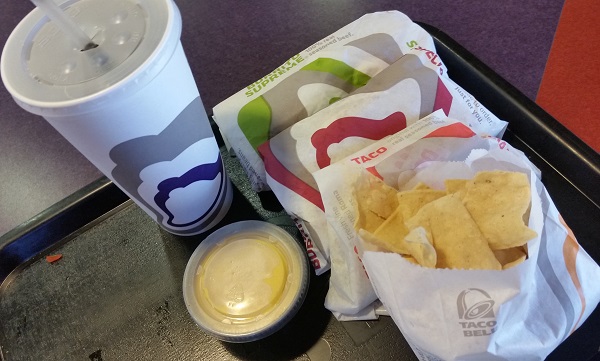 Like the Taco Bell Big Box reviewed last year, this is another bundle offering from Taco Bell who kindly put five items together in one easy-to-order package. It’s really more of a bundle than a combo, as we’ve discussed before the distinction being that a bundle offers several main menu items along with a side and drink whereas a combo is usually just packaging up one menu item, one side, and a drink.

This particular bundle includes a Cheesy Gordita Crunch, a beef Burrito Supreme, a regular Crunchy Taco, Nachos, and a drink for $5. Last year’s Big Box included a Bacon Club Chalupa, the same taco and Burrito Supreme and drink, sans nachos. While the Gordita Crunch is smaller than the Bacon Club Chalupa, the tradeoff in the addition of nachos makes this meal feel equally substantial.

The Burrito Supreme has been a staple on the Taco Bell menu for decades. This is a beef and bean burrito with lettuce, tomato, cheese, onions, red sauce and it’s made “supreme” by the addition of sour cream. It’s a basic burrito that is also decently filling all by itself.

The Cheesy Gordita Crunch I got was wrapped as a Chalupa but you can see what it is – basically a Double-Decker taco with a beef crunchy taco on the inside, wrapped in a fluffy soft outer tortilla, sandwiched in between with a “three cheese blend”. I found this taco to be a completely unnecessary invention. The cheese in the outer section tasted dry and dull, like a wilted, sad quesadilla. I would much prefer the original Double Decker taco which put beans in between the two tortillas.

Rounding out the main menu items has got to be the loneliest looking beef taco I’ve ever seen. See how timid and shy this taco seems? Put some stuff in there, Taco Bell!

The nachos are always great – I love their cheese sauce. So, for me, the bundle was a winner and a fine deal at $5. Ringing these up separately would cost over nine bucks! However, that distressing fact tells me more about how expensive Taco Bell has gotten than about what a deal this bundle is.