Ahh, Lent.  The Catholic season leading up to Easter is a time when many fast from eating meat on Fridays, a tradition that drove the creation of the original McDonald’s Filet-O-Fish, by the way.  Now fast food is into fish in a big way.  Could last year’s drought also play a role?  We knew beef prices were expected to rise, so perhaps pushing fish items is a way to try to “diversify the menu portfolio” a bit.  In any case, some heavy hitters have released a number of fish items and only time will tell whether they catch on with the public.  See what I did there?  “catch”?

First up, the aforementioned McDonald’s has apparently learned nothing from their lame Chicken McBites as they are doing the same thing with fish.  The surprising lack of creativity starts with the name, Fish McBites, and works all the way down to the look and feel, which are as boring as their fowl counterparts.  At least they are promoted by a fun singing fish interactive game on their website. 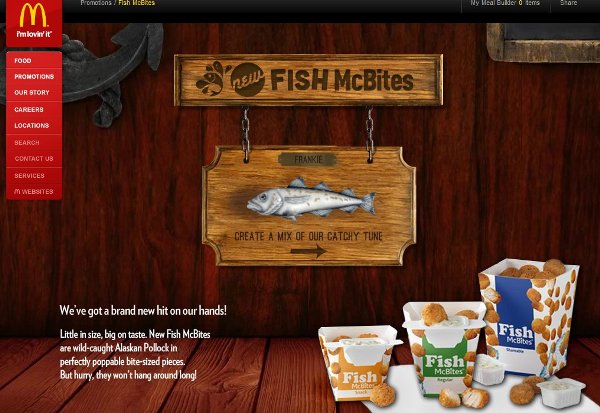 Carl’s Jr., which regularly beats McDonald’s in the chicken sandwich category (in this author’s humble opinion), decided to go the quality route with a charbroiled – NOT FRIED – offering.  Their Atlantic Cod sandwich looks so good even I am tempted to try it, and I don’t like fish.  But if you want to try it, Carl’s is offering a $1 off coupon downloadable from their website.

Not to be outdone by the burger joints, scrappy Del Taco is casting a wide net for their fishy offerings.  New Beer Battered Fish Tacos join returning shrimp tacos and burritos (original or Baja), making this the biggest fast food fish menu for a non-fish restaurant.  Wow! 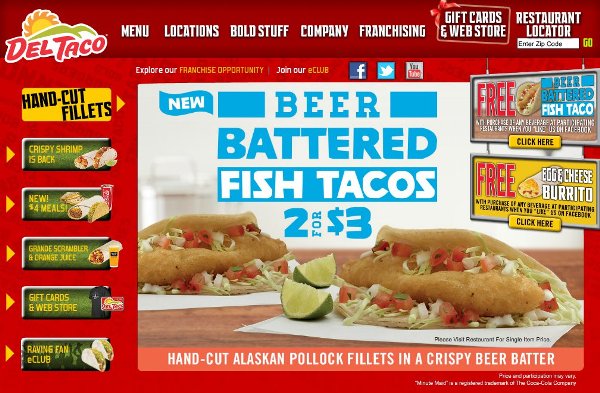 Like I said, I don’t eat fish.  So someone will have to report back on what’s good and what can be let go.