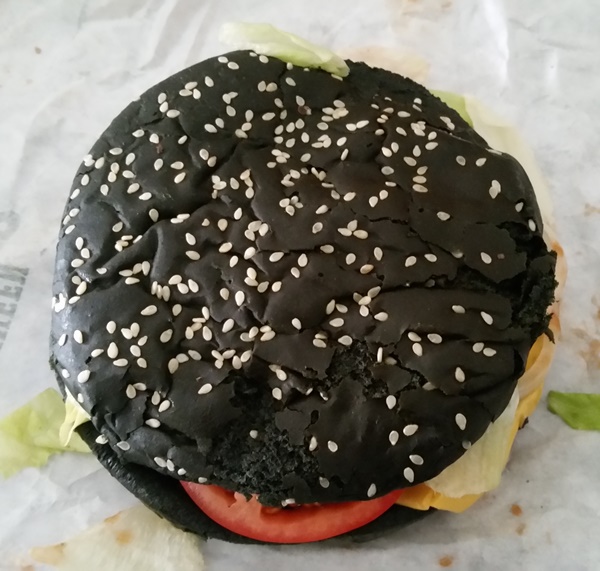 There’s a rumor spreading across the interwebs about Burger King’s latest sandwich. What rumor? We’ll get to that in a minute. But first, what is a “Halloween Whopper”? Burger King is getting into the spirit of my favorite holiday nice and early with this interesting fast food menu item. First, they started with the guts of a basic Whopper (beef patty, cheese, lettuce, tomato, mayo, ketchup, onion) and added A-1 Steak Sauce. Then they took the bun and, through some freaky mad science experiment, turned it BLACK. The bun is really really dark.

The Halloween Whopper arrives in a fun “mummy” wrapper as you can see below. Clever. The taste is distinctly Whopper, except for the addition of the A-1, which I found to be a distraction. I guess Burger King thought just putting a black bun on a regular Whopper wouldn’t be unique enough so they felt the need to plus it up. Me, I would’ve been happy just given the choice between black bun or regular. The A-1 sauce, everyone knows, is salty. Not necessary on a fast food hamburger. In fact, it is so salty it ups the sodium count 21% from 1260mg to 1530mg. Cholesterol is also rated higher at 105mg vs 85mg. Interestingly, the Halloween Whopper (with cheese) has 20 fewer calories than the regular Whopper with Cheese. Saturated fat on both sandwiches is the same at 15g. 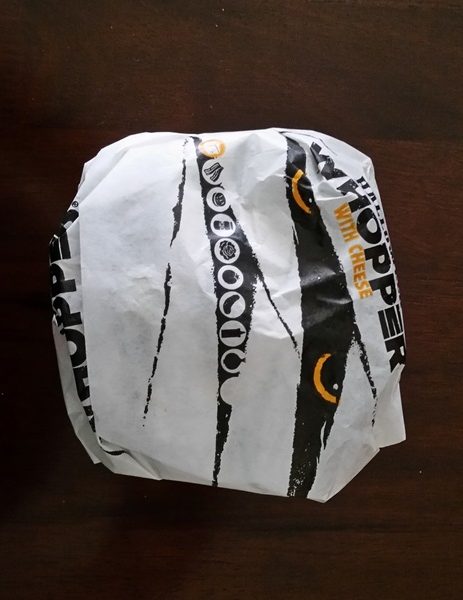 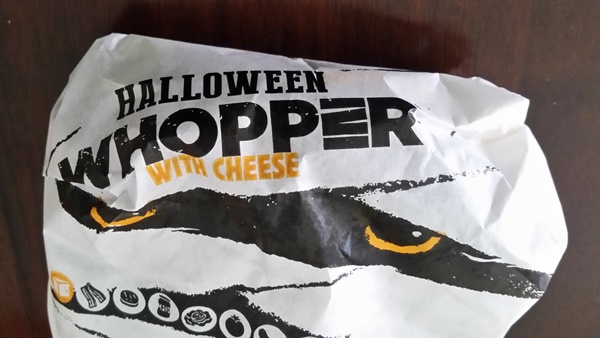 Looking at the inside of the sandwich, we see that it is the same as any regular Whopper. I felt there was a different taste to the bun, but that could’ve been psychological. Overall, I think the biggest taste distraction was the aforementioned A-1. Remove that and I bet a side-by-side blind taste test would show the sandwich is just like the original.

Now for the big surprise. This is what is buzzing on the Internet and there is no polite way to say it: If you eat a Halloween Whopper your poop will turn green. The prevailing theory for those who have observed this is that a lot of green food coloring is needed (along with blue, probably) to make the bun appear black. Is the rumor true? I can call this rumor VERIFIED and CONFIRMED. Ha! Mind you, no side-effects. The sandwich didn’t make me sick or anything, it’s just a little gift Burger King gives you later on to remind you of your holiday treat. Maybe it is a clever way of advertising? This way they get you coming and going.