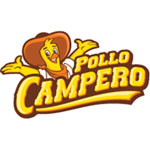 About:
Founded in 1971, Guatemala
Big in Latin America, Growing in US

I saw a feature on this Guatemalan fast-food eatery on the Food Network, and they mentioned that this Central American take on fried chicken had expanded into los EEUU (that’s the USA,) and, specifically, Los Angeles. I looked up the chain’s website and found that there was a Pollo Campero (Spanish for “country chicken,” mas o menos) in the Valley; to be specific, the Panorama Mall. The mall and Panorama City in particular represent the quaint San Fernando Valley of old colliding head-on with the new, multi-cultural valley of future.

So what about the restaurant? It’s a slick looking place, with representations of the company’s mascot everywhere. If you don’t read Spanish, your out of cluck… er, I mean luck, but thanks to a zealous high school foreign language department, I didn’t have that problem. Thus, I was able to read the history of Pollo Campero, begat in Guatemala in 1971 and now in a multitude of Spanish speaking lands, including Southern California. The website also mentions expansion into China.

I had a 3 piece combo, which included two sides, a soda and either bread or tortillas. I went for rice and beans (you can also choose fries, slaw or pure de papas [mashed potatoes,] but I decided to keep it real.) The rice was so-so, with peas and tomato mixed in. The beans were unusual, sort of a cross between Boston baked and charro beans, which I liked. My first two pieces of chicken were tasty enough, but it was upon eating the breast piece that I experienced the full specter of Pollo Campero. The marinade process that makes it unique makes the entire piece appetizing. The actual spice combo is not unlike that of a popular Colonel you may know and love. It’s not an exact copy but it’s not at all unrelated, either. The key is, when you order, make sure you get a breast piece. It’ll make it worth the trip, especially if you are a breast man, like myself (my taste in chicken not withstanding.)

With foreign fast-food places expanding into the USA, one can only hope that my favorite “hamburger shop” in Japan, Mos Burger, is not far behind.