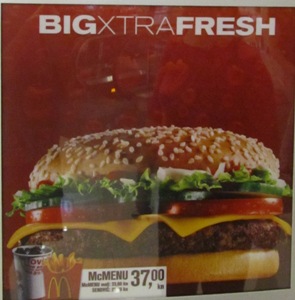 Up until now, my Eurpoean tour of McDonald’s fast food restaurants has included Spain, France, and Greece, all countries that use the euro.  But don’t panic, the sandwich advertised above isn’t 37 euros.  For in this entry we find ourselves in Split, Croatia, where they use the kuna.  The rate of exchange is 1 kuna for about 14 cents euro, or about 17.5 US cents.  So that 37 kuna burger is about $6.46 in today’s dollars.  Kinda pricey, but hey, at least it’s a combo. 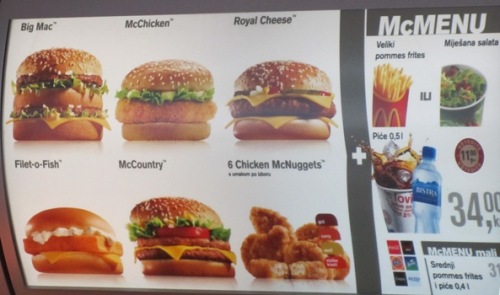 Checking out the McMenu, which at this time we are used to seeing as the main menu board, we see the trusty “Big Mac” and “Royal Cheese”.  The “McCountry” is the same as Greece’s “McFarm”, that is, a pork sandwich.

This McDonald’s was in a mall in downtown Split, and we had to walk quite a ways to get to it.  The mall was very Americanized, with most of the stores being cookie cutter to their US counterparts.  In fact, except for the prices, you would swear you were in a suburban mall in Anytown, USA.

Interestingly, Split was the only place where the manager actually tried to block me from taking pictures.  No other country seemed to be bothered by the pasty white shutterbug snapping pictures of the menus.  So the pics in this post are all a little off due to their clandestine nature.

Here are some fun unique items: 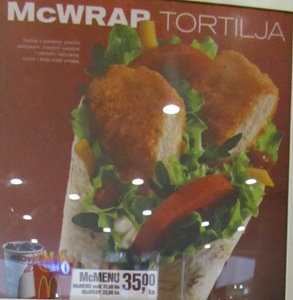 Now you know how to say “sticks” in Croatian: 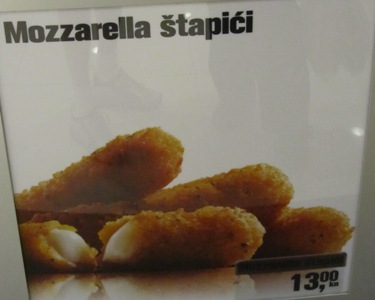 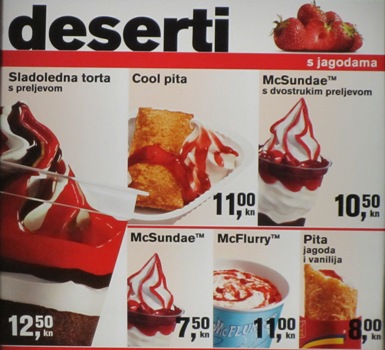 Finally, the Happy Meal offered the good old American standbys plus the mysterious “McToast” cheese sandwich we first came across in Greece:

Our next post will be the fifth and final installment in the European McDonald’s tour – Italy.