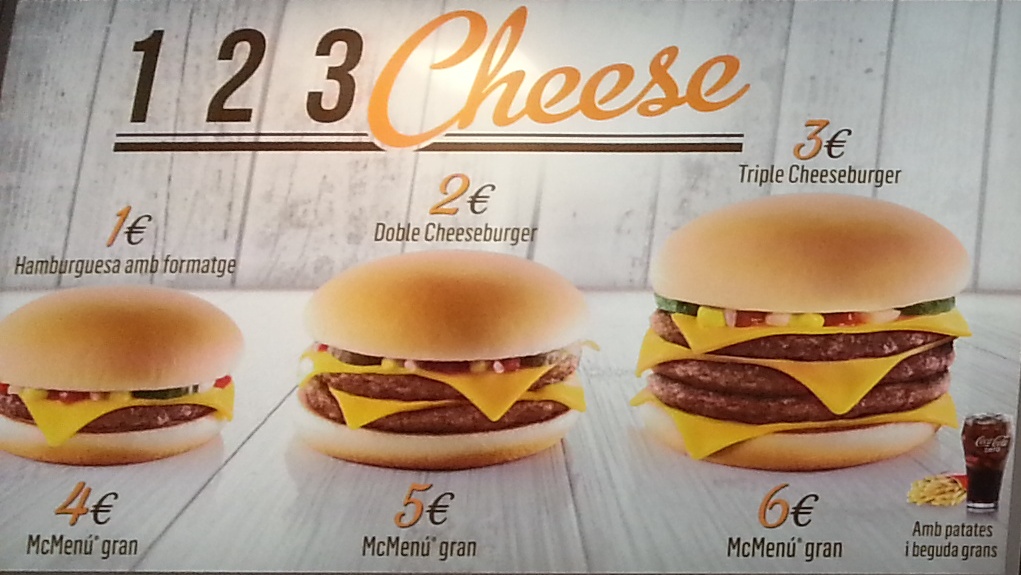 Back in 2010 we first shared a menu from Barcelona.  In March 2014 I went back and sat down for lunch.  First, let’s start with the menu. 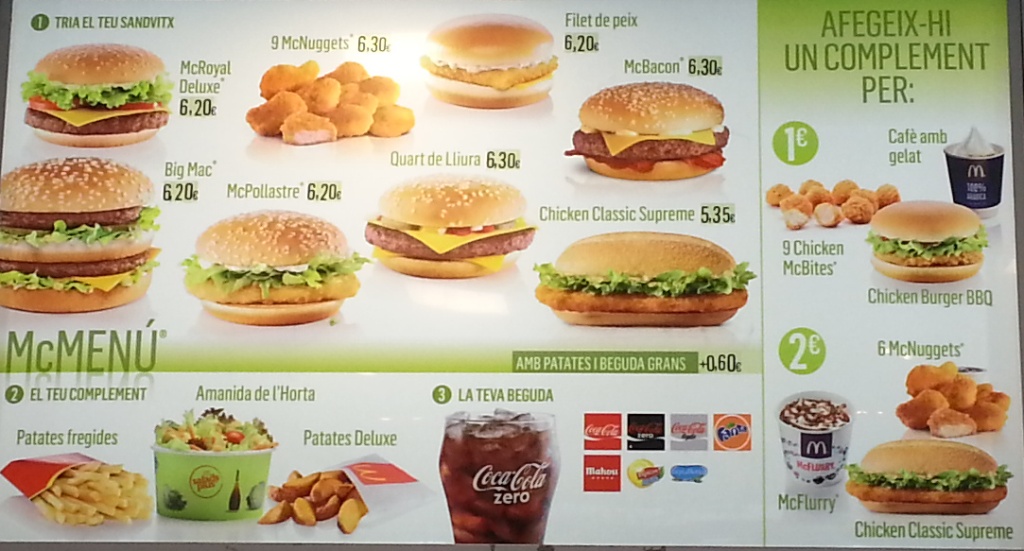 You will see a lot of familiar faces on the Barcelona McDonald’s menu.  Single, double and triple cheeseburgers are highlighted.  The Big Mac actually takes a back seat to the McRoyal Deluxe.  The sandwich I zeroed in on was the McBacon, which I review below.  The Patates Deluxe also caught my eye and I thought – if McDonald’s regular fry is so good then let’s see what they can do with a wedge cut.  Keep reading. 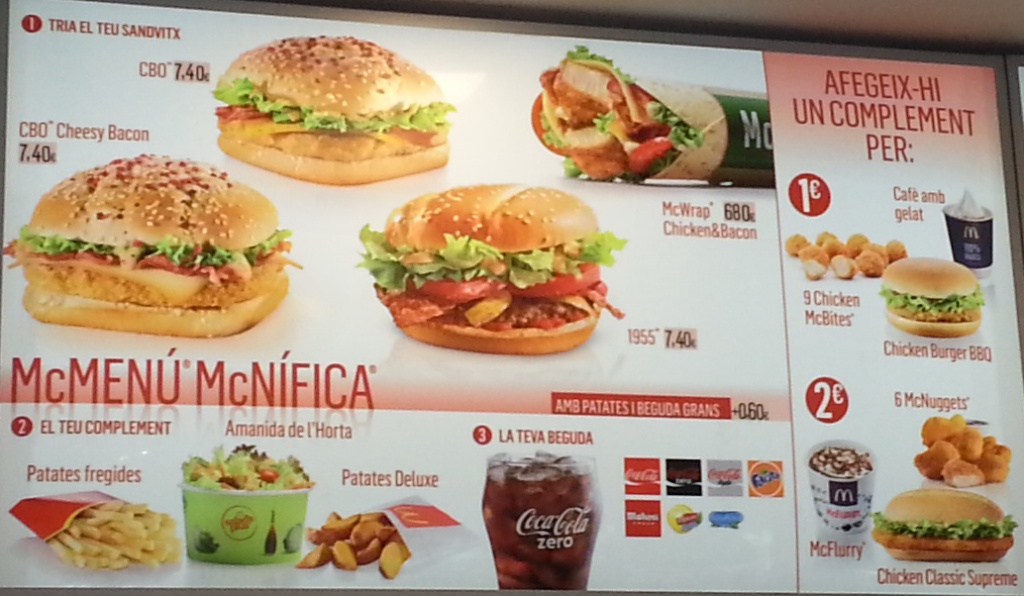 The good ole’ CBO is still there.  I was intrigued by the uniquely-titled “1955”, likely a reference to the year the first store Ray Kroc opened.  However, Ray Kroc didn’t have such a loaded burger when he got started.

Lots of fancy chicken bits and the desserts looked tasty.  But let’s get to the meat of the article (pun intended). 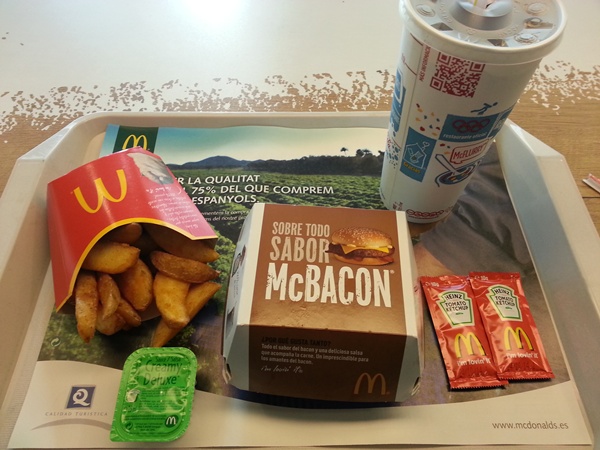 The McBacon sandwich is a Quarter Pounder with bacon, plain and simple.  As shown above, they permitted me two ketchup packets (they are so stingy in Europe) and a “Creamy Deluxe” dipping sauce for the fries. 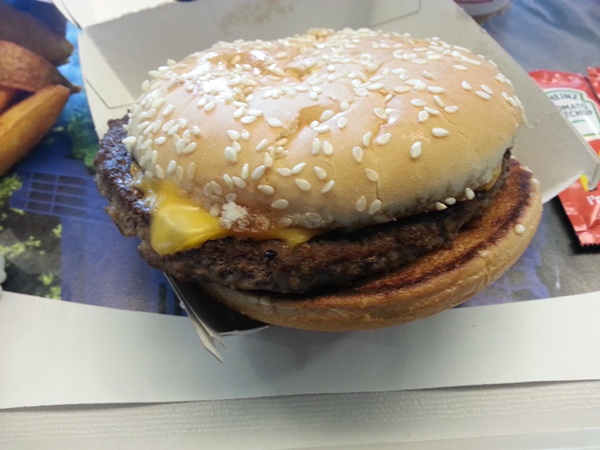 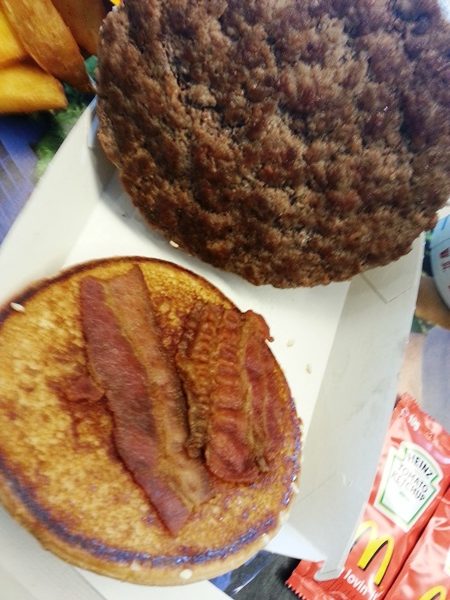 The burger was plain and boring.  It was dry and unbecoming, with two lonely strips of wafer thin bacon and too-little ketchup.  The grilled bun was ok, but it didn’t have to do any heavy lifting as this was a rudimentary burger. 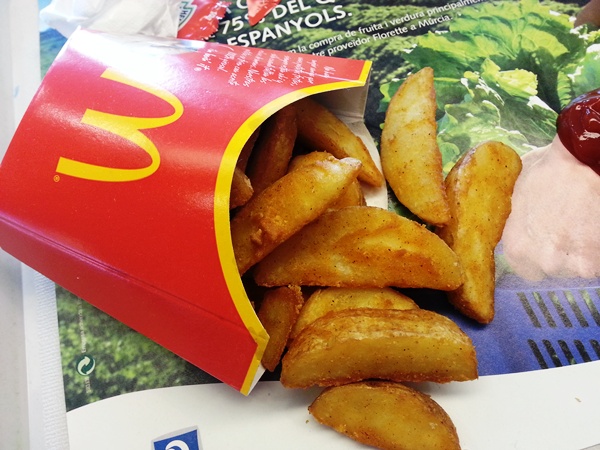 The fries were also ok.  Not great, but not bad.  I am really not a fan of wedge cut fries but thought these might be really tasty in that special way only McDonald’s seems to know.  However, they were just what you would probably imagine.  Flaky and crispy on the outside and soft on the inside.  Well cooked and consistent-tasting.  Just a LOT of potato in each bite.  When you are used to the normal fry, this is a bit jarring.

One other impression.  I now have some data on how much prices have changed in Barcelona over the last four years.  My first trip in April 2010 showed the Big Mac combo for 5,55 and the CBO for 6,25.  Almost exactly four years later, they are 6,20 and 7,40, respectively.  That’s a 12% jump for the Big Mac and an 18% increase for the CBO.  Interesting.