The Catholic season of Lent, which culminates in Easter Sunday, is meant to be a time for sacrifice and reflection. Catholic children are taught to “give up” something they like during the period. Fasting in olden days has given way to a modern tradition of not eating meat on Fridays during Lent. This particular tradition seems to have triggered a growing tend in fast food marketing. The challenge: how do you capitalize on a large part of your demographic that will otherwise skip your restaurant because your base menu is all meat? The answer: SEAFOOD.

We’ve seen this coming. Fish sandwiches have been long advertised during Lent. In fact, the McDonald’s fish sandwich is said to have been created for this reason. And we started seeing the beginnings of a promotional “season” two years ago. But never before have I seen so many different chains hopping onto this particular bandwagon. Here are just a few from this past week:

Wendy’s has been promoting their Premium North Pacific Cod sandwich. Gone are the days of the basic fish sandwich. Like other fast food chains, Wendy’s seems to really embrace long names to their new products. Another marketing mini-

Carl’s brings back their own cod sandwich from the last two years but under a new “skin” and new name. In 2013, it debuted as the Charbroiled Atlantic Cod Sandwich. Now it is fried and renamed the Redhook Beer Battered Cod Fish Sandwich.

Del Taco has also been using this season to promote its seafood lineups. Now it has more than ever. Crispy Shrimp (above) and Beer Battered Fish Tacos (below). 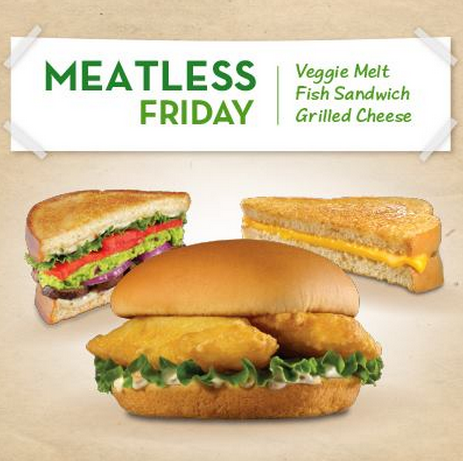 Steak ‘n Shake is in on the action. However, this ad above from Facebook flat out embraces “Meatless Friday” with a selection of items other than fish. Veggie sandwiches and grilled cheese make good alternatives if you are not a fan of seafood. 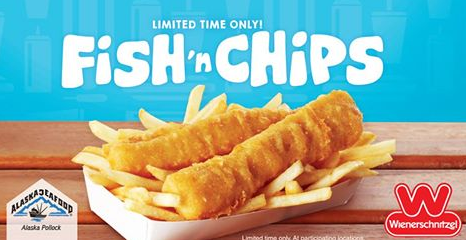 Even Wienerschnitzel is not immune, as the above Facebook promo illustrates.

So, a season known for abstinence and sacrifice has been commercialized. What’s next? Old menu items come back during Memorial Day weekend?