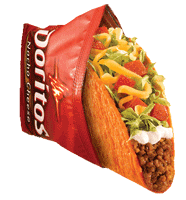 Back in Spring 2010, Taco Bell began promoting their corporate cousin Frito Lay by installing Doritos as a side item in select Taco Bell combos.  I’ll admit that back then, I had mixed emotions about that maneuver, which I saw as just another effort to deliver the least expensive “meal” possible.

But on March 8, 2012, Taco Bell takes the synergy to a whole new level with a taco shell made out of a giant Dorito.  The “Doritos Locos Tacos” are standard Taco Supremes in “a shell made from Nacho Cheese Doritos® Chips“.  Unbelievable?  Evidently enough people think so that Taco Bell itself had to add the phrase “Yes this is for real” to its own website.

Funny, but I don’t think I object to this idea as much as serving Doritos on the side.  Gimmicky, sure, but it doesn’t feel cheap.  And I might just have to give this taco a test drive when it debuts.