Hardee’s restaurants are introducing a serious southern comfort food. The classic fried bologna sandwich, dubbed “The Oscar Mayer Fried Bologna Biscuit”. Although I have never been a fan of this, I have to say this looks pretty tasty. 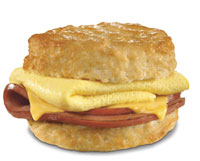 According to the press release, this is “a slice of melting American cheese and a folded egg atop a thick-cut slice of grilled Oscar Mayer bologna, all sandwiched between a signature Hardee’s Made From Scratch biscuit.”

If you have a Hardee’s near you, check it out!