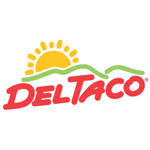 I love Del Taco.  My favorite item has to be the Chicken Soft Taco, which I find superior in every way to any equivalent at Taco Bell.  I love the Chicken Soft Taco so much that I silently endured the price increase last year to 99 cents that was justified in advertising as the result of an increase in the amount of chicken in each taco.

Imagine my dismay, then, when I unwrapped my most recent Chicken Soft Tacos only to find this: 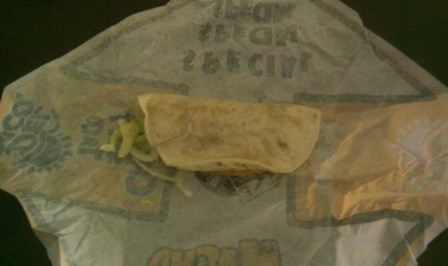 The picture almost doesn’t capture the miniscule size of this taco.  Is it just me, or did Del Taco reduce the diameter of the tortilla?  It is now exactly five inches.  I don’t know what it was before, but this seems like the “del Carbon” size. 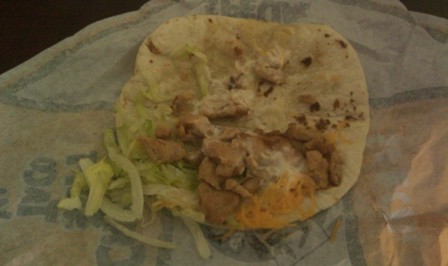 There still appeared to be a good portion of chicken inside, however you can probably tell from this picture that there is barely enough room to fit any condiments and still close the shell.  I have to be right on this – the TACO IS SMALLER.  Del Taco, did you think nobody would notice?  Is this taco worth 99 cents, or 1.09, or some such similar price?  Are you going down the path of Taco Bell in downsizing to maintain a “bargain” menu item and if so, can a potato taco be far away?

I’ll still order the Chicken Soft Taco.  I am addicted.  But why not come out with two sizes?  Do a tiny one at a lower price and go ahead with a Macho Chicken Soft Taco at a higher price point.  At least I wouldn’t feel insulted when I order it.