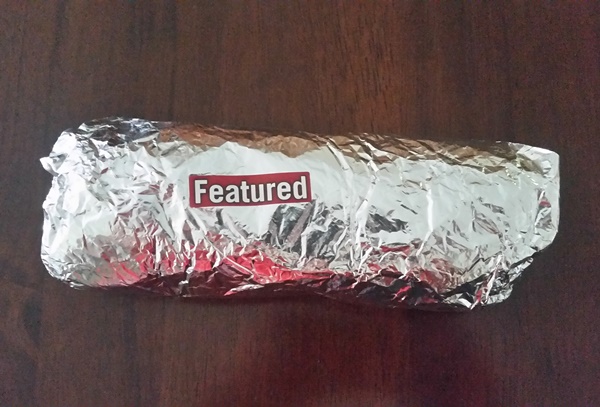 There are two sides to the Del Taco menu. There is the budget side, where Buck & Under favorites and other relatively inexpensive fare reign supreme. Always thinking about value, this is where I make most of my buying decisions. But there is another side, one I admit I rarely visit, which I call The Land of the Premiums. Most fast food restaurants have a Land of the Premiums. At Del Taco, this is where the most common word spoken is “Macho.” Macho Beef Burrito. Macho Chicken Burrito. The occasional steak or fish premium taco or burrito. All these live in the Land of the Premiums and carry a price to match, typically in the $4 and up range.

Enter the latest category of premium menu items at Del Taco: The EPIC series. A set of four offerings with names that are as much mouthfuls as the burritos themselves. The Epic Steak & Potato Burrito, The Epic Chicken Chipotle Ranch Burrito, the Epic Cali Steak & Guac Burrito (that one must be conforming to some invisible character limit) and the flagship: The Epic Grilled Chicken Avocado Burrito.

We heard about the Epic Grilled Chicken Avocado Burrito in the mystery envelope Del Taco sent to us last week. Now it’s time to unwrap it and give it a try.

First of all, it’s difficult to truly represent the scale of this burrito in a picture. I put the entire wrapper in the frame as a reference. This burrito is ENORMOUS. It is hefty. It is more than a handful. And frankly, it’s something approaching the scale of a Chipotle burrito. Don’t believe me? According to their website, a chicken burrito at Chipotle with rice, black beans, salsa, and guacamole weighs 552 grams. On the Del Taco website, the Epic Grilled Chicken Avocado Burrito weighs in at 499 grams. That’s only a 1.7 oz difference. Wow. 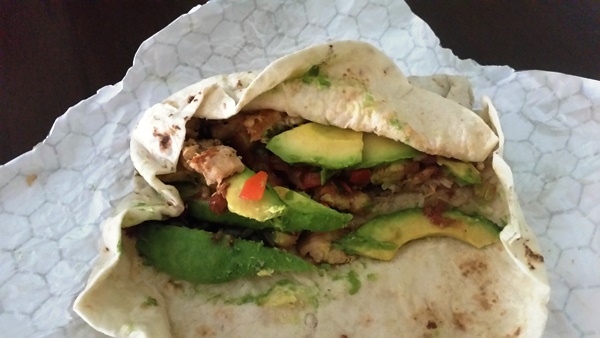 Inside, you will find a tightly-packed party of large grilled chicken chunks, massive slices of avocado, “fresca lime” rice, pico de gallo and salsa casera, and black beans. My first impression when looking at the interior was: this is a promo item and I wonder how small the avocado slices will get over time. But that cynical note was quickly pushed aside when I handed the burrito off to our staff member Deborah, an admitted avocado lover.

Her first comment upon taking a bite? “Mmmm.” That is a direct quote. She went on to say “Thick avocado slices you bite into like you bite into a chunk of chicken… not bland, has flavor and perfectly ripe… The chicken chunks were also tasty” and she was surprised by the amount of ingredients and the generosity of the main ones. “It certainly was not hiding the avocado in a world of rice – it was really chicken and avocado.”

High praise for a Del Taco fast food burrito that would be equally at home on a dinner plate in a sit down restaurant. And in that way, it still seems like a good value despite the crushing $5.45 price tag. We will see how long this item remains on the menu and what else Del Taco decides to do with their Epic line-up. But nevertheless, this one is a winner.