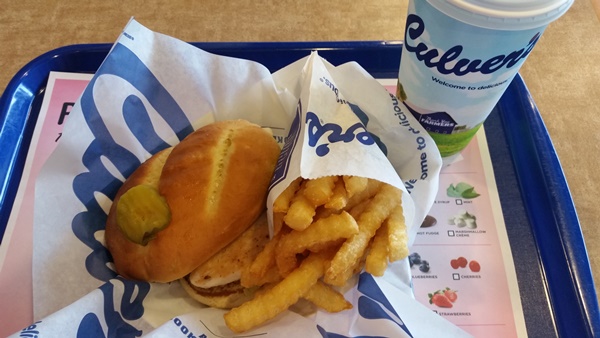 Culver’s is known primarily for two things: Frozen custard and ButterBurgers. Like Kansas-based Freddy’s Frozen Custard and Steakburgers, Wisconsin-born Culver’s has a generous and tasty menu to represent its Midwestern roots and appeal to the masses. But while Freddy’s sticks to the basics, Culver’s ventures into more varied territory with menu items like fried chicken dinners, Reubens, and pot roast sandwiches.

Regular readers of FastFoodSource know that, apart from seeking the best burgers, I am forever on a quest for the best fast food chicken sandwich. So far, nothing has beat the Carl’s Jr. Chicken Club for the best tasting chicken breast coupled with delicious toppings in the proper (to my tastes) 0.9:1 meat:condiment ratio. In that spirit, I was eager to try Culver’s offering. 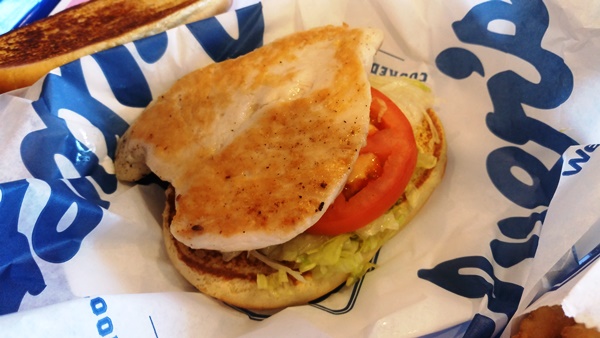 First, the good. The oblong sandwich contains a generously-sized chicken breast. The white meat chicken was moist and well cooked, with just a tease of seasoning on the outside. Accompanied by lettuce, tomato, and a few pickles, the sandwich is well-proportioned and fits well on the bun.

On the downside, I found the overall experience a bit bland. This is a common complaint that befalls most attempts by burger chains, like McDonald’s, to get their chicken sandwich right. The chicken breast did not taste as if it had been grilled. The seasoning apparent in the picture above did not translate to taste and the overall effect was that of a boil-in-a-bag piece of chicken. Underwhelming. Topping that, or should I say lack of topping, was the fact that the sandwich is delivered dry. I guess some people like this as you can add mustard, mayo, or whatever to your tastes. I would’ve preferred that Culver’s made an effort to package a sandwich that was a complete taste experience out-of-the-basket. If their food designers thought it went great with mayo then slap some mayo on there. I ended up adding honey mustard and that helped a bit.

Another observation, although not really good or bad, was the absence of cheese. There is a crispy chicken breast version of this sandwich, but that also is without cheese. In this case, I think a slice would’ve jazzed up the sandwich a bit.

Overall, I’d rate this sandwich as neutral. It’s not something to go out of the way for but it’s not offensive either.