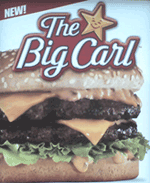 This sort of rivalry between fast food chains goes on all the time, but usually not so overtly. After all, isn’t the Big N’ Tasty just McDonald’s response to the Whopper? And don’t forget Burger King’s own version of the Big Mac. Dubbed the Big King, the sandwich did not last in the U.S. (but it was pretty good.)

Anyway, I tried the Big Carl the other day. First, while it is advertised in the TV ad above at $2.49, my local Arizona store was offering the sandwich for $1.99 and a combo for $3.99.

If you’re thinking “Whoa – this things gotta be huge if they’re using the Six Dollar patties” you can relax. They are not. The Big Carl uses the classic patty of the Famous Star and the Western Bacon Cheeseburger. Note the side-by-side comparison of a Famous Star and Big Carl in the last frame above. The assembly and ingredients are basic: heel, thousand island, lettuce, meat, cheese, meat, cheese, more thousand island, crown. Note the absense of McD’s pickles and onions. The Big Carl can more plainly be described as a double cheeseburger with thousand island and lettuce.

It is well known that McD’s Special Sauce is not simply thousand island dressing, so the taste of the two sandwiches is a bit different out of the gate. But I am a big fan of thousand island burgers so I really enjoyed this fast food burger. The meat, always tasty and juicy, lived up to Carl’s reputation. And the blend of meat, cheese and thousand without any other real taste distractions left me wanting more.

I’m wondering if Hardee’s will also release a version on their side, but as of this writing they have not. For those of us in Carl’s Jr. territory get one while you can. However I predict it will go the way of the Big King largely due to it’s inability to compete with the more superior siblings on the Carl’s menu. Time will tell.