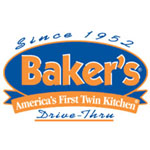 I first stumbled upon this small chain while teaching traffic school in the Inland Empire (Riverside and San Bernardino counties in Southern California.) They advertise the “twin-kitchen,” meaning that they serve a full menu of Mexican and American fast-food. The Mexican food is more or less typical lard-beans and ground-beef fare; the American food is worth the trip, though. The breakfast, which I have never tried, seems a bit more creative, with an egg taco, a machaca burrito, a chorizo and egg burrito, etc.

The best item on the menu is the Double Burger, which is not unlike the In-and-Out Double-Double. The patty is actually a bit smaller than a double-double, but it is cooked to order and served hot. The fries come in two sizes: regular and ½ pound (which is a lot of fries.) They are not unlike the standard McDonald’s/BK/Jack fries, but like the burger, they are always cooked to order and served hot.

The nicest part about Baker’s is that the service is always friendly. It must be easier to control when you only have 36 restaurants in a two-county area. Also, there is a seemingly infinite list of combos (I prefer the Grandpa Baker, a Double Burger with fries and a milkshake.) The order-taker seemed to know them all during my last visit, and made a combo suggestion without being pushy or blatantly going for an upsell. Another great plus is milkshakes made from hand-dipped ice-cream.