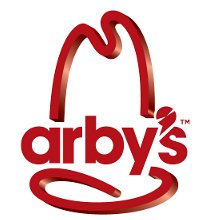 By Arby’s invitation, I tried the new Grand Turkey Club sandwich.  It was probably the fact that it was SMOTHERED in mayo that kept me from being overjoyed by this sandwich which was, for all intents and purposes, a tasty alternative. 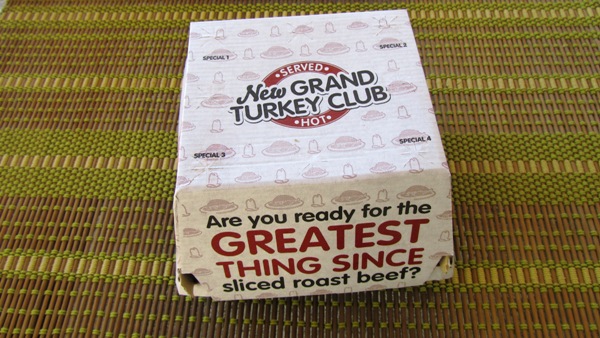 The sandwich comes in a gigantic cardboard box.  And good thing too, as this isn’t a skimpy sandwich.  Construction is mayo, lettuce, tomato, sliced turkey, Swiss cheese, bacon, and more mayo.  In my case, unfortunately, it was more like mayo, lettuce, mayo, tomato, mayo, sliced turkey, mayo, Swiss cheese, mayo, bacon, and more mayo.  But setting that aside, what you have are the same ingredients as my favorite “club” sandwich, the Carl’s Jr. Chicken Club. 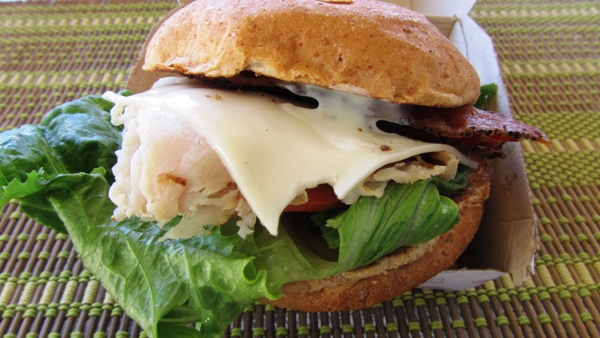 Look at that.  That is one fine looking sandwich.  No objections.  Generous amounts of lettuce, turkey and bacon made the sandwich tasty and flavorful.  This three-napkin sandwich was big enough to need two hands.

At $4+, the sandwich isn’t cheap.  But nowadays, nothing seems to be.  However, putting it next to its smaller sibling, the Turkey Classic, you see a stark contrast between two offerings that are about a dollar apart price-wise. 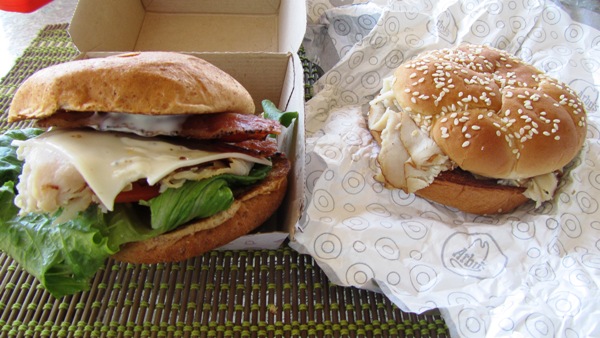 No that isn’t Photoshopped.  That is the size difference between the Grand and the Classic.  At over three bucks, the Turkey Classic is a poor value.  What Arby’s tried to do, apparently, is take its popular roast beef sandwich (which is just meat, bread and Arby’s sauce) and replicate that formula with Turkey.  What you are left with, however, is a very disappointing pile of sliced turkey on a bun.  Sauce needs to be specified, although it would probably be tasty with honey mustard. 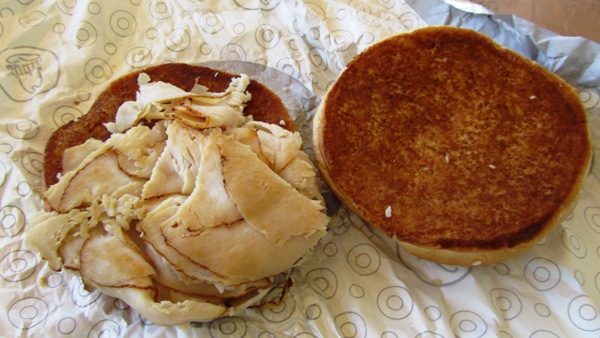 Beyond boring.  And there is NO way to justify over $3 for this.  With my coupon, the gigantic and generous Grand was $3.49.

Arby’s has had a good shredded chicken sandwich for some time.  The turkey offerings seem on par.  Getting back to the Grand, I would have preferred shredded lettuce instead of leaf, but that is personal bias and the big leafy garden toppings were nothing to complain about.

Check out the Grand Turkey Club the next time you visit Arby’s.  Just tell them to go easy on the mayo.