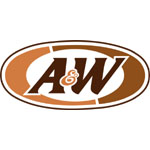 My memory of A&W Restaurants is basically centered around the root beer floats, and the 1970’s menu that included the Papa Burger, Mama Burger, Teen Burger and Baby Burger. My personal favorite was the “Disenchanted Adolescent Burger.” Knowing that the A&W chain had been acquired, along with Long John Silver’s, by the Pepsi-cum-Tricon-cum-Yum! group (which includes Pizza Hut, Taco Bell and KFC, as well as the recently scrapped “Irving’s House of Ptomaine.”) I was anxious to try what appears to be a new restaurant in Victorville, California. A visit to their website reveals new locations (many co-branded with KFC) throughout California and the U.S.A.

The design is retro, with a jukebox playing oldies (and I didn’t have to put any money in, so it was well worth the cost.) The menu was a bit complicated (with hamburgers, hot dogs, pastrami and something called cheese curds, which I was not brave enough to order.) I chose a combo that included a double cheeseburger, fries and soda (and, to my delight, I was able to upgrade to a root beer float for only 85 cents.) It looked like a menu that is being used franchise wide (as opposed to the old A&W models, in which the only consistent thing on the menu through the 80’s and 90’s was the root beer.) I also added a corn dog to my meal for 99 cents, since I realized that my cholesterol count had recently dropped below 8,500.

The burger was, in a word, tasty. The meat was flavorful, the produce was fresh, and it was far superior to the average fast food fare. The corn dog was efficacious. The fries were basically a non-entity, a simple copy of everyone’s favorite McFry. The crowning achievement, which made the entire trip worthwhile, was a re-imagination of the traditional float. This was not the same float I had when I was a kid; it was much better. The root beer was the same appetizing concoction as always. The ice cream closed the deal, however. It wasn’t scooped or soft-serve… It was sort of a “soft-scoop” vanilla ice cream, for lack of a better word, and I may have been the best dang root beer float I ever tasted. It dissolved perfectly as it hit my mouth and left just enough melted matter in the root beer base to compliment the essence. I felt like Agent Cooper in Twin Peaks when he tries the coffee and cherry pie for the first time.

Yum! Brands has done a great job with their entry into the burger market. Try it for the burgers and floats, and let’s hope they put a little R&D into the fries.